Prediction: Crayola today announced they are “retiring” the colour “dandelion yellow” – I predict it is a ploy to increase sales and interest. First the sale of the “last” boxes and then the media generated by people asking for it back.

Don’t worry – it will be back. Just like the Coca Cola Classic!

From a marketing perspective this is smart. Not that taking toys away from children is ever a fun thing to do, but the energy and excitement that is, and will be generated might be worth all the tears.

If I were the marketing consultant on this project I would applaud this endeavour – but – I’m that it will have the outcome they hope to have.

First of all – look at all the free advertising they are getting. Second – this is already a tried and true marketing ploy that worked like a charm for Coke.

If you remember back to 1985 there was a similar hullabaloo that happened when Coke removed its most popular soft drink from the market. Not only that but they replaced it with “NEW Coke” – blayuck!

After a VERY short stint and LOUD outcry from the faithful – Coca Cola Classic was returned to the consumer shelves.

They (Coke) stoically insists it was a genuine business decision to replace the “old” recipe with a new one. Many believe it was a smart marketing tactic. Regardless of the motive – the end result was a global rebranding of Coke to Coca Cola “Classic” and the NEW flavour was finally taken off the shelves in 2002. Remarkably lasting for 17 years.

The uproar generated by people increased the visibility of the Coke brand and no doubt it’s market share. 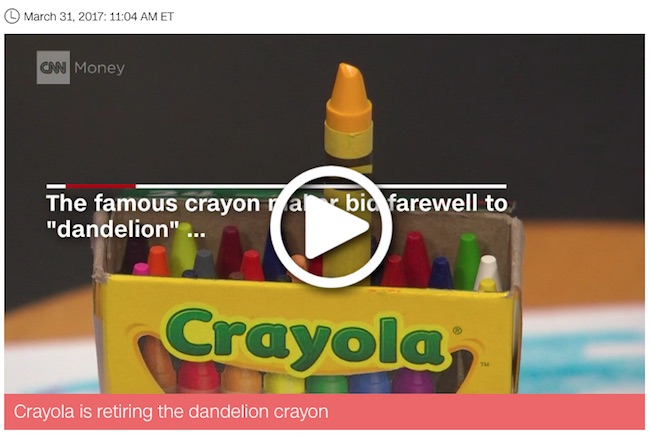 Just as an aside – this post is a good example of how to skim traffic from the daily headlines.

If this is indeed what Crayola is planning to do they are willing to make children cry all over the world for their crayon they love to use in their safari colouring books, and when they make the furry buttons on clown suits.

Mean ole’ Crayola – how can you take away a kids bright and cheery colour?

I expect it won’t last too long. After a bit of time in the media generating a ruckus to bring it back – it will be back. Maybe just undr new name maybe?

It seems they still dominate the “best sellers” list for crayons but in our big wide world of increasing competition there is never any harm in taking more of the market share pie.

Is this just a “copycoke” marketing ploy? Or is Dandelion really retiring?