A few months ago Facebook started with advertisements having autoplay feature in your feed. No need to click on the play button anymore.

This new feature of Facebook video autoplay can be annoying!

Even though they don’t play the audio without your tap – they immediately suck up your cache and start to play.

It appears it isn’t just ads anymore either. Cute kittens start to run around your screen, car’s are crashing, people falling off bridges! That’s where it gets annoying. Cute kitty’s are ok, but murder and mayhem? At least not before lunch – please!

Fortunately it is simple to turn off: 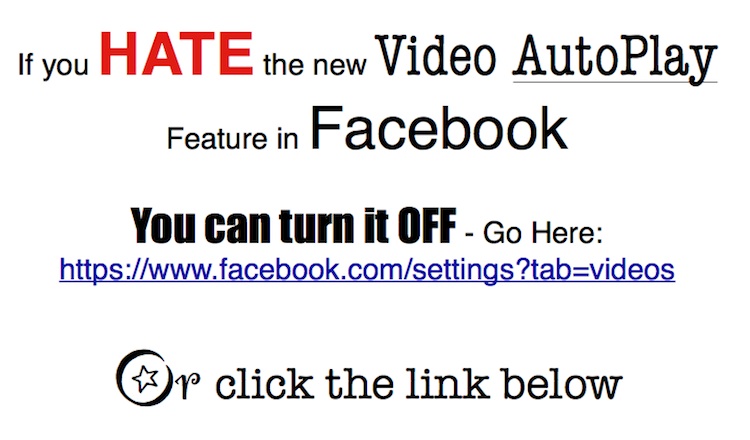 Unfortunately these video’s also autoplay on your mobile Facebook page and suck up your battery life as well as use your WiFi.
You can’t turn off the autoplay feature on your mobile BUT you can select “connected to wifi only”.

In your Settings app select and open Facebook. Under “Settings” there is another Video option where you can select “Autoplay on WiFi Only”

If you have an Android, go to your App Settings on the left and select the ckeck-box “Autoplay Video’s on WiFi Only”

On the other side of things, autoplay is good feature if you are the one doing the advertising.

Done right you can effectively establish a “pattern interrupt” which can make a huge difference in your social media marketing plans. It looks like advertising on the Facebook platform is just becoming more and more interesting with each new feature being offered.